skip to main | skip to sidebar

Henry was born in the scenic town of Lucban, Quezon (formerly Tayabas Province) on Nov. 10, 1926. His mother Arcadia Brillon was the great grand daugther of Hermano Pule a.k.a. Apolinario de la Cruz a national hero who fought for religious freedom in 1815-1841. Henry made a thorough research about his great great grandfather (Hermano Pule) when he heard from his grandmother Francisca Laqueo Brillon about him.
When he started his High School at the Tayabas Provincial High School he learned of Hermano Pule as a revolutionary during the early part of 18th century. He started making a research about him but in all history books written by Filipino historian he found only a page about him.
When Henry studied at Union Theological Seminary of Manila his love for history made him interested to know more about Hermano Pule. But the Seminary also has a very sketchy write up about him. After receiving his B.Th. diploma he continued his study taking B.S.E majoring in History and Sociology. He was so disappointed to find out that historian had a very short and limited knowledge of Apolinario de la Cruz. Upon his graduation he was able to meet and became close friend of Dr. Nemesio Prudente, Dr Renato Constantino Sr, and Fr. Horacio dela Costa who encouraged him to pursue the life and work of Hermano Pule.
His love of working with the Filipino masses-the oppressed, deprived, and marginalized led him to take a direct training in Community organizing under Saul Alinsky the noted and considered father of Community Organization in America in 1963-64. He spent more time to dig the historical record in the archives at Chicago, Washington D.C. Michigan and other places just to gather the necessary historical facts of Apolinario dela Cruz.
He became a noted CO worker among the so called slum dwellers of Tondo Forshoreland in 1969-81. He became the first recognized CO worker in the Philippines thru the ZOTO the famous and first people organization that was organized. Several CO trainees came over to learn the concept, philosophy, technique and methodology of CO. All over Asia CO became known and organized in different Asian Countries. This paved the way for Henry to be invited in different countries all over the world. When he became member of the Urban Rural Mission of C.C.A. and Urban Industrial Mission Desk of World Council of Churches based in Geneva. His membership gave him more time to travel all over Europe. He went to the achives of Madrid with Cesar Chavez a CO worker among the farm workers in the grapes and lettuces plantations in California. Cesar served as his interpreter in English from the historical perspectives that tells something about Apolinario dela Cruz known as "tulisanes indio" who was responsible in killing General Ortega, the Governadorcillo of Tayabas province in a skirmish that took place between the followers of Hermano Pule known as Cofradia de San Jose in 1840. From the records in the archives it was said that he had several women that surrounded and served him for sex as well as housekeeping. The saying that goes around as reported by Padre Sancho of Lucban such as "huwag kang kikibo Dios ang nahipo" just made Hermano Pule a womanizer and had several quiridas. However, he had his favorite as common law-wife name Juana Laqueo.
This part of the story of Hernano Pule was not mentioned in the researched written by Alip and other Filipino historians. Henry is the one who augmented the additional story to complete the life and work of Hermano Pule. That he was able to have a child name Apolinario Laqueo instead of dela Cruz because all with family name of dela Cruz became wanted by the Spanish government.
The family tree was submitted at the Archives of the Philippines as well as to the Philippine Historical Institute. Rev. Noel Baybay a professor of Union theological Seminary in Dasmarinas, Cavite wrote his thesis on the belief based on the writings of Apolinario dela Cruz.
Posted by Eli Bitancor at 11:10 AM 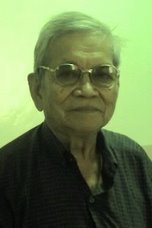 Eli Bitancor
I am just a plain old dude with special interest in relating with other people young and old. Intelligent people are nice to be with but somehow their topics of conversation seem to go far from reality making an average minded player groping in the dark yawning and so sleepy. I like to level myself when talking with average minded people. They have all their ears, attention, and the caring emotions that serve as stimulants for a wholesome and nice conversation. Oftentimes, average people talk about other peoples achievements and failures. Then they compare lives of other people around and have some reflections about their own strengths and weaknesses. What I think may be is that average people can be good players of free enterprise because they know how to coordinate with one another. Their positive attitude is not imposing upon others. Of course, the more I relate with all kinds of people around this world, the more I tend to widen my space afar from talking with idiots. Idiots always talk not only about themselves but 'to themselves' making me so confused whether or not I have to talk to myself also for me to mingle with them so easily. Could I be so idiot in doing that?